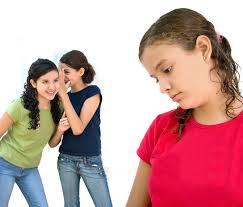 I was devastated when I learned that on September 9, twelve-year-old Rebecca Sedwick went to an abandoned concrete plant in Bartow, Florida, climbed a tower, and threw herself off to her death.  Rebecca had been bullied and harrassed for months by as many as 15 girls who sent her electronic messages urging her to kill herself.

Are you also shocked and horrified by the reality that a child can be driven to take her own life to escape bullying?  Yet this is not an isolated incident.  Bullying has become an epidemic.  We can’t ignore it when more than 3.2 million students are affected each year.  What is new is our use of social media.  In a click of a button, damaging information about another person can be spread everywhere, anonymously, and it doesn’t ever go away.

Last May, another 12-year-old, Gabrielle Molina, hanged herself in her bedroom in Queens, NY, after she was called “a slut and a whore” online and a video of her was put on YouTube.   Gabby’s parents knew she was having some issues with bullies at school, but they did not know about the cyberbullying.   Gabby’s sister knew about it, and also knew that she had harmed (cut) herself a lot, but Gabby asked her sister not to tell anyone.  And we are wondering: could anything have been done to prevent this tragedy?

The urgent question is: What is our responsibility as parents when bullying is taking place?  Isn’t it time for us to face the truth that every child (yes, even our own) has the potential to be a bully, and every child is at risk of being a target.

Sheriff Grady Judd in Polk County, Florida, sent a strong message when he ordered the arrest of two girls, ages 12 and 14, and charged them with felony aggravated stalking in the Rebecca Sedwick case.  Judd said, “… the parents [of these girls] aren’t doing what parents should do.  Responsible parents take disciplinary action.”  The 14-year-old wrote on Facebook, “I know I bullied Rebecca and she killed herself.  IDGAF (I don’t give a ____.)”  Her father took no responsibility for his daughter’s actions, calling her “a good girl” and saying the charges were untrue.  Just as troubling, he allowed her to go back on Facebook, giving her access to do further damage.

Sheriff Judd’s action signals to parents that if we don’t monitor what is going on, there are potential repercussions for our child and for what happens once our child is accused, or even charged with a crime.   How we choose to respond, once we know our child has been involved in a bullying situation, has consequences.  We may be aware that our child has been the target of bullying, but we are less likely to recognize or intervene when our child is being the aggressor.   Our tendency is to think “not my child.”  No parent wants to acknowledge a painful truth.  But we need to take off our blinders and be alert to signs that our child might be behaving in a hurtful and cruel way toward another.  By responding responsibly we protect our children or another who could be a victim.  Our response could also prevent us as parents from being held criminally responsible.

How do we know if our child is bullying?  Maybe we hear it from other parents or from a teacher.   But we all need to set up our own early warning system and recognize red flags, such as when our child:

As parents we have more responsibility than ever to be watchful, to acknowledge it if our child is bullying, and if so, to take immediate and appropriate action.   We invite you to attend a FREE and critical session for parents, “A Culture of Mean,” where we will discuss how to prevent and respond to bullying.  Susan Kurlander, M.Ed., will facilitate the discussion on Thursday November 21 , 6:00 – 7:30 p.m. at Jewish Community Services in Owings Mills, 3506 Gwynnbrook Avenue (in the JCC).    This session is part of Jewish Community Services’ Parent Discussion Series, co-sponsored by the JCC, designed to help parents navigate the challenges that come with raising children, from infancy through young adulthood.  Pre-registration is required.  For more information and registration, visit www.jcsbaltimore.org/parenting-series  or call 410-843-5371.

Resource: Rebecca Sedwick’s mother started “Safe Circles,” a computerized program that provides filters you can put on your Facebook and other social media to block out bullying.

Colleen Brady contributed to this blog.

Questions about parenting?  Send an email to parenttalk@jcsbaltimore.org.  For more information on parenting click here or call 410-466-9200.